Let me look at briefly the achievements of Abenomics in Employment, Income and Public Pension in figures.

The second Shinzo Abe cabinet inaugurated in December 2012 after Hatoyama, Kan and Noda cabinets of DPJ from September 2009. Shinzo Abe resigned from the premiership in September 2020 due to health reason, succeeded by Suge cabinet. But Sinzo Abe continued to have significant influence on Japan and the world after his resignation.

In the first place, Employment. One of the remarkable achievements of Abenomics, particularly for young people will be the decline in unemployment rate, sweeping away the severe job scarcity under the prolonged deflationary economy in the previous periods. The unemployment rate fell to between 2 and 3 percentage rage, i.e. natural unemployment rate, virtually achieving full employment. Although some divergence exists between industries with the emergence of Covid-19 pandemic in 2020, labor shortage continues to subsist in Japanese economy overall. 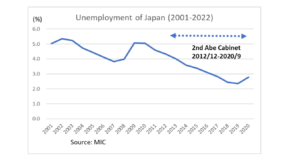 Secondly, National Income/NGDP. Although straight away interpretation may be difficult due to decreasing birthrate and aging population, nominal GDP increased during the second Abe cabinet period except in later 2020 affected by Covid-19 pandemic. Abenomics works well overcoming the persistent and severe deflation which existed in the previous periods. 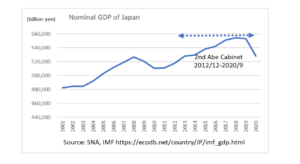 Thirdly, Public Pension. Abenomics opens the way for the public pension finance of Japan in the future. It is symbolized in the performance of GPIF, Government Pension Investment Fund. It has transformed the pension fund management policy from extreme conservatism to the style of taking appropriate and proper risk. As a result, its performance has improved and is improving significantly as the graph below indicates. For Japan under the declining birth rate and aging population, one of the most important issues to tackle is how to support and maintain public pension finance. Abenomics apparently works well and shows the way forward, bringing relief and hope for Japanese population, especially for young people.

The essence of Abenomics is to make use of and leverage excess savings in the private sector, one of the strongest points of Japan. To put it simply it is the economic policy of placing importance on INVESTMENT. It is also the policy of bringing proper RISK TAKING CULTURE to Japan. 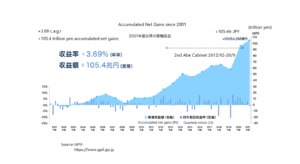 Abenomics, in my view, is the economic policy which has historical significance opening the way for Japan in this century and further forward in the future, as indicated above in the three key areas.

Losing Shinzo Abe, the former Prime Minister, in that manner is extremely shocking to me as a Japanese and world citizen, certainly to most Japanese, and many people in the world.

A great hero or a genius often becomes eternal by tragic death. That’s a consolation.

It is important to evaluate Abenomics and develop, evolve and leverage it in the future, in my  view.